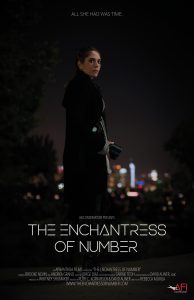 Athina is a government spy living in Los Angeles in 2037. Her job is to photograph people committing crimes against the government and to turn the evidence in. One night, a mysterious package with a watch inside is delivered to her door. As she ponders what it could be for she is interrupted by the sound of police, who have killed her neighbor, the man she secretly loves.
Using the watch she manages to escape the cops and meets a woman named Ada Lovelace, the Enchantress of Number, who is the creator of the original algorithm, the basis for Artificial Intelligence. Ada Lovelace give her a choice: join the revolution or face the consequences of her actions in her own time.